The development of Computing has already provoked many new philosophical ideas, particularly in theories of logic, language, and mind, as well as generating some entirely new Meta-Studies of Computing and Information Science. It has also raised many distinctive moral issues of increasing prominence, ranging from data security, privacy and ownership, through online behaviour, digital addiction, information bias and fake news, to ethical design of robots (e.g. in healthcare, self-driving vehicles or autonomous weapons). But the philosophical importance of Computing is perhaps even more fundamental, providing A New Paradigm of Explanation. Even for philosophers with no theoretical interest in computers as such, they are now indispensable tools of academic life, for example in text preparation, presentation, communication, research and analysis. They also have the potential to be wonderful tools for modelling, experimentation and analysis, especially of complex phenomena (such as social or biological interactions) that resist conventional treatment. Yet most of those who take a serious interest in philosophy are unable to exploit these possibilities, because such modelling requires a level of understanding and technical competence not easily acquired without formal training. (For more detail on these various points, see What Can Computing Offer Philosophers?)

Meanwhile, those who learn to program can become fascinated by the philosophical horizons of the intellectual world this opens up, as they develop their abilities to think abstractly about information, languages, algorithms, and proofs. Some of these issues are rather remote from practical concerns (see Hilbert, Gödel, and Turing). But others are of clear relevance to future software engineering, especially for developments in Artificial Intelligence (see Computational & Philosophical Issues). Likewise those who aspire to develop intelligent machines face a number of fundamental Philosophical Issues in Robot Design, while information engineers increasingly have to grapple with legal and Ethical Issues raised by the ubiquitous place of computer systems in modern society. Computer scientists can benefit from studying the work of philosophers in all of these areas, though again it can be hard to bridge the frontier between the disciplines, as most education for computer scientists is relatively narrow and technical, focused more on immediate economic utility than futuristic speculations. 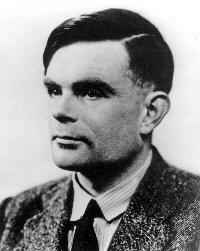 Pioneer of Computing and thinking machines. His historic 1936 paper invented the concept of a computing machine